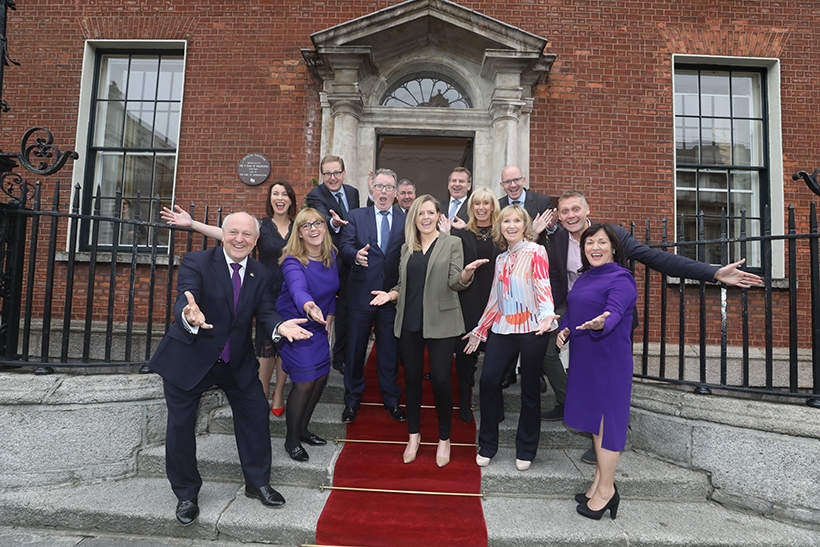 A select group of C-suite business leaders from a range of sectors were recognised this month at a special awards event held in Dublin.

Ardlinn and the Sunday Business Post hosted a celebratory lunch at Dublin’s Merrion Hotel, to honour the 12 winners recognised in the inaugural Ardlinn Executive of the Month awards.

Winners chosen from the technology, aviation, agri-food, hospitality, construction, legal and financial services sectors were all present at the event.

Ardlinn is the executive search arm of Cpl Resources Plc and the first Cpl brand to focus solely on top salaried positions of €250,000-plus. 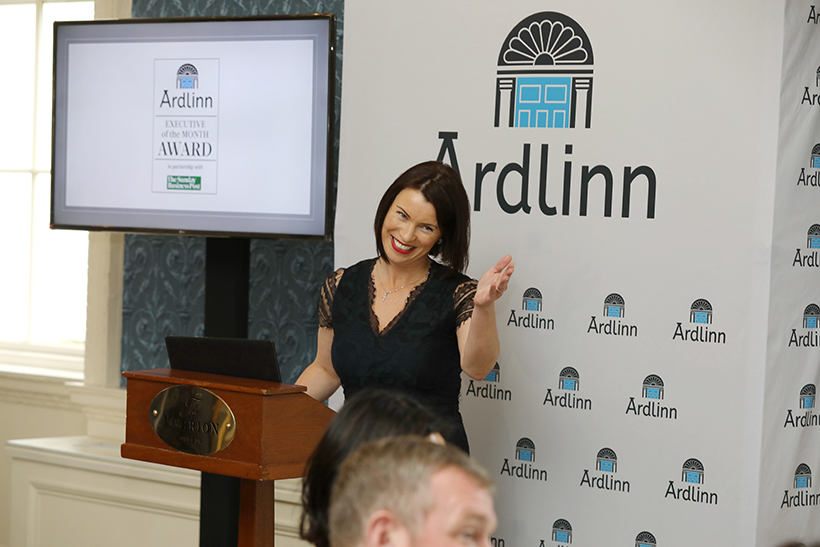 About the Ardlinn Executive of the Month Awards

Ardlinn launched the Executive of the Month programme in November 2017 with the aim of recognising the role played by Ireland’s top executives in driving growth in the wider economy.

“The process has proved to be a great success and we have been delighted with the awards, which provide a fitting recognition to many of our most influential Irish business leaders,” said Áine Brolly, founder and director of Ardlinn.

“It was a great privilege for us to be able to bring so much business talent into one room to celebrate The Ardlinn Sunday Business Post Executive of the Month awards.”

Ardlinn was founded on the basis that the need to source, develop and access top C-level talent. The need for this has never been greater in Ireland.

“As a nation, we are in the midst of prosperous and exciting, but ultimately precarious, times” said Brolly.

“However, with the various business leaders recognised through the awards, I feel we are in good hands as we face the challenges and opportunities inherent in the Brexit process over the coming months and beyond.”

Since joining Airbnb in 2014, Hassell has seen staff numbers at the company rise from 600 to more than 3,000 globally.

Fionnuala Meehan, Google Site Lead for Ireland, was recognised for her pivotal role in leading the growth of the tech giant’s Dublin campus, which now employs 7,000 people representing 70 nationalities.

In financial services, Carin Bryans, Senior Country Officer for JP Morgan in Ireland, was named The Ardlinn Sunday Business Post Executive of the Month in June.

The global nutrition group has an annual turnover of €3.7 billion and employs 6,200 people in 32 countries.

In hospitality, Pat McCann, Chief Executive of Dalata Group plc, was also awarded for his success in establishing and leading Ireland’s largest hotel group. Dalata employs 45,000 people across the Clayton and Maldron brands in Ireland and Britain, alongside a portfolio of partner properties.

In aviation, AerCap CEO and executive director Aengus Kelly was recognised for his role in making the company a global leader in aircraft leasing and aviation finance, with more than 1,500 owned, managed or on-order aircraft in its portfolio.

Michael Jackson, Managing Partner at law firm Matheson, was named The Ardlinn Sunday Business Post Executive of the Month in May in recognition of his role in the firm’s success.

Martin Shanahan, chief executive of inward investment promotion agency IDA Ireland, was also recognised for his ongoing contribution to job creation in Ireland and his role in the development of enterprise and innovation policy. 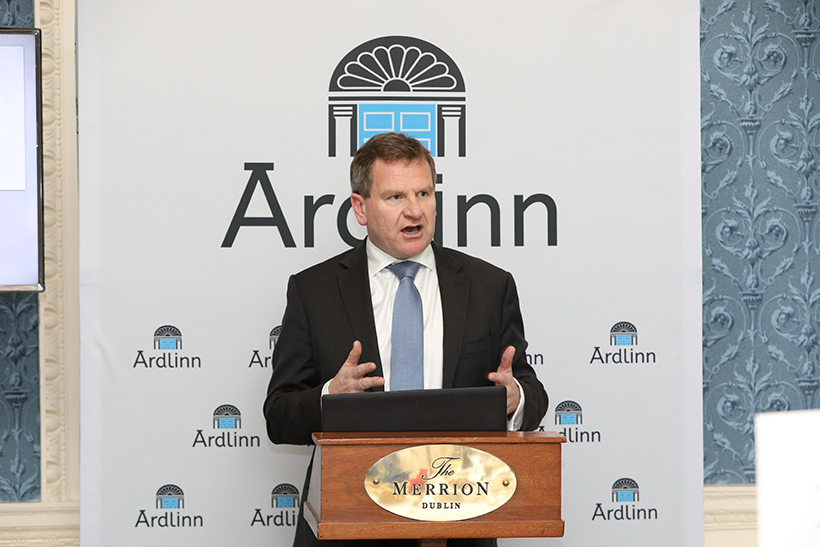 “It has been a pleasure to be involved in these awards, which recognise the very best in Irish business,” said McCoy.

“The contribution made by the individual award winners and their respective businesses cannot be understated as we look towards another year of steady national economic growth.

“From indigenous Irish start-ups to blue-chip global powerhouses, these awards have shone a light on the exceptional leadership being provided week in week out across this island.”

NOVEMBER 2017: Brendan Mooney, chief executive, Kainos Group Plc
Brendan Mooney joined Kainos in 1989, having graduated from Ulster University with a degree in Computer Science and progressed through the ranks, taking on his current position at the company’s helm in 2001.

He began his career at Kainos in technical roles before moving into presales and project management positions following a move to the company’s Dublin office in 1994.

Six years later, he returned to Belfast to begin preparing for his current role as chief executive. Read Brendan’s interview.

He was appointed operations director and to the main board of Jury’s in 1994 and became Chief Executive of Jurys Doyle Hotel Group Plc in 2000.

A native of Co. Kilkenny, she studied Commerce at University College Dublin and trained as an accountant with PwC, joining Waterford Foods in 1992 five years before it merged with Avonmore Creameries to form what would become Glanbia plc.

Talbot became a member of the company’s Group Operating Executive in 2000 and was appointed to the role of Deputy Group Finance Director five years later.

She was appointed to the role of Group Finance Director in 2009 and recently led negotiations to sell off a controlling stake in Glanbia’s dairy business to its largest shareholder, Glanbia Co-op, creating the joint venture Glanbia Ireland. Read Siobhan’s interview.

He joined Forfás in 2005 in the role of Divisional Manager and became Forfás CEO five years later, before taking up his current position in 2014.

Shanahan led the Government’s Action Plan for Jobs 2011-2014 and is a board member of IDA Ireland and Chair of its Investment Committee. He is also a member of the National Competitiveness Council. Read Martin’s interview.

She joined Google Ireland in 2005 as EMEA Shared Services Manager and was appointed Online Sales and Operations Manager in 2008 and Ad Ops Director for the EMEA in 2010.

Meehan was appointed to the dual roles of Google Site Lead for Ireland and Vice-President for Google Marketing Solutions, EMEA region, in October 2016. Read Fionnuala’s interview.

APRIL 2018: Aengus Kelly, CEO and executive director at AerCap
Aengus Kelly is a chartered accountant and holds a Bachelor’s Degree in Commerce and a Master’s Degree in Accounting from University College Dublin.

He worked for three years with KPMG in Dublin before beginning his career in the aviation leasing and financing business with Guinness Peat Aviation (GPA) in 1998.

MAY 2018: Michael Jackson, Managing Partner, Matheson
Michael Jackson joined Matheson in 1991 as a trainee after graduating from University College Cork with a Degree in Civil Law.

Having started his career with the firm’s corporate department, he was appointed Asset Management and Investment Funds Partner in 2001 and became Managing Partner in October 2015. Read Michael’s interview.

He has worked with major banks and financial services organisations in Ireland, Britain and the Middle East on strategic, communications, change management and execution initiatives.

Carin Bryans joined JP Morgan in 1990 and has held a number of positions with the company in Ireland, including head of operations and head of client services.

She was appointed Senior Country Officer for JP Morgan in Ireland in 2010, with overall responsibility for the US bank’s businesses in Ireland.

Bryans holds her Degree in Finance and International Business from The University of Texas in Austin and an MBA from The Michael Smurfit Graduate School of Business in Dublin.

She sits on the board of the American Chamber of Commerce Ireland and is Chair of the IFSC Funds Group. Read Carin’s interview.

He has a First Class Honours BComm International from the University College of Dublin. Read Darragh’s interview.

Before joining AirBnB in 2014, Hassell worked with cyber-security firm Symantec in Ireland and the US.
She went on to work with Vodafone as Group Head of Customer Experience, and also with Sage, in the role of Director of Global Customer Experience and Web Strategy.

Since joining Airbnb in 2014, Hassell has seen staff numbers at the company rise from 600 to more than 3,000 across 31 offices worldwide. Read Aisling’s interview.

Before moving to Ireland, he worked for PLCs in the UK for 40 years, most recently as Chief Operating Officer and Board Member at Kier Group Plc.

Bowcott joined Kier in 2007 as a Director of Kier Regional and was one of two Deputy Managing Directors and Chairman of Kier Scotland and Kier Northern.

Before that, he led the construction division at AMEC Plc and was Managing Director of John Mowlem’s building division. Read Stephen’s interview.

Download the Ardlinn 2019 Salary Guide for an overview of... END_OF_DOCUMENT_TOKEN_TO_BE_REPLACED